My husband Stan said all he wanted for his birthday was a party. I agreed, but knew it would be a big undertaking with my ALS and fatigue. We planned it for Saturday April 29, the day before his 61st birthday.

Invitations were easy, through Facebook events and emails, plus some others that Stan contacted.

We spent the week before the party working on decluttering the house. I had just had a food delivery, so we filled my 5 boxes with giveaways that Big Brothers Big Sisters picked up on Friday. We also tracked down some extra folding chairs and two card tables. I worked on a playlist, starting with Amazon Prime Classic Rock playlists, then adding some more modern music. It was 5 hours long and we played it on shuffle and repeat so it continued throughout the party. I love Amazon Prime Music! Oh, and Stan bought a new stereo that can connect to my phone so we were able to use good speakers.

Our friends Erika and Paul offered to come up early from Sacramento to help us get ready. I am so grateful – there is no way I could have done it alone.

I went to Wal-Mart Saturday morning and picked up a helium balloon kit, a Happy Birthday sign, a couple of inexpensive beach towels to cut and use as bench covers for our picnic tables, a couple of orange plastic tablecloths, and six inexpensive brightly colored chairs.

When I returned from Wal-Mart, Stan was leaving for Costco for food and drinks for the party. My dad came over and helped with party prep for a little while. When Paul and Erika arrived with their daughter and niece, I was able to make a decorating list and a honey do list for some things Stan ran out of time to do. We had some things from previous parties: an inflatable pepper to hang on the front porch,

a colorful cardboard parrot for the wall, table cloths for picnic tables, and paper lanterns for the trees.

Our younger friends, Erika and Paul worked so fast. Andy and Maddie and Jacqueline helped with the decorating too, as well as had some fun.

We got everything ready in time for the party.

I was the official photographer, with my new camera. That is a job that can be done without speaking, and it was fun.

I will let the pictures tell the story. What was significant about the party is that everyone was smiling.

Around 9 pm I was quite tired and sad and I thank Thien for listening to me then. We decided I better go to bed. As soon as I was alone, I began to cry, grieving because I could no longer stay up until the party was over. I was also over tired, which was true of my teary New Year’s Eve in the Galapagos. Andy came in to comfort me and listened to my writing on my Boogie Board. He asked if I wanted Dad to come in, but I didn’t want to take him away from the party. I explained to Andy that I have to grieve, and I promised I would be better in the morning.

The next morning I got up early to take my meds and saw this in the backyard.

We woke Stan up on his birthday by bouncing a balloon like a beach ball over his bed.

Stan, Andy, and Chuck went dirt bike riding. Then we met Catherine and Brian for our semi-annual Stan’s Birthday at Murrietas. 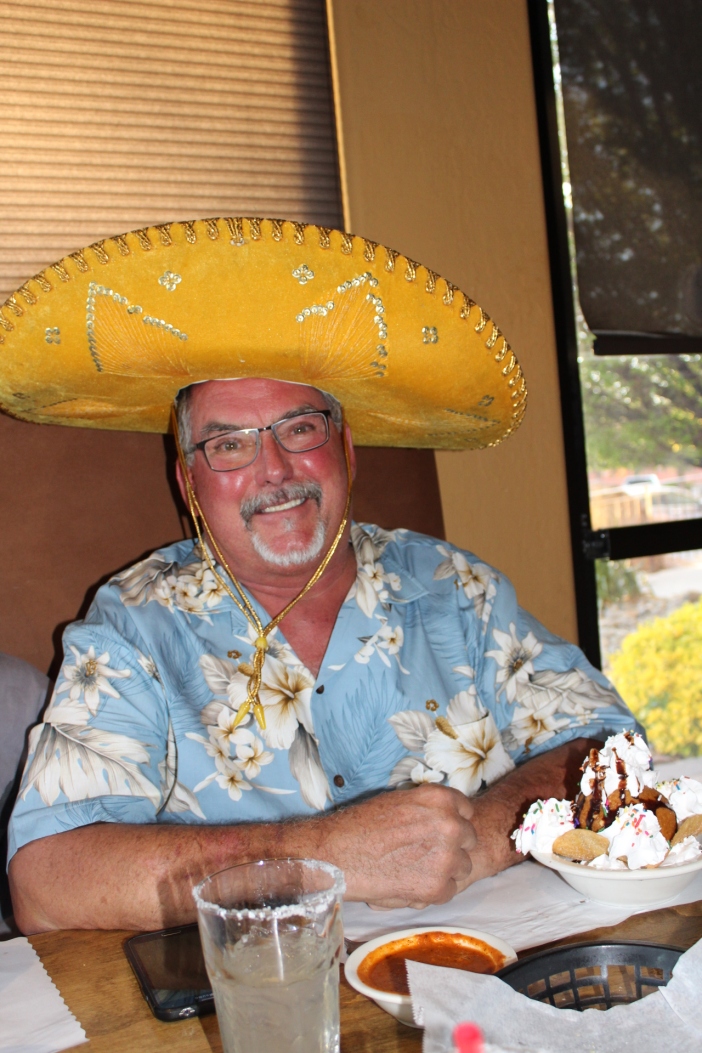 All in all, it was a great birthday for my wonderful caretaker who puts me first despite his pain.

5 thoughts on “Birthday Bash for Stan”