Once when my father was a boy
a stone hit him on the head.
Hair would never grow there.
Our fingers found the tender spot
and its riddle: the boy who has fallen
stands up. A bucket of pears
in his mother’s doorway welcomes him home.
The pears are not crying.
Later his friend who threw the stone
says he was aiming at a bird.
And my father starts growing wings.

Each carries a tender spot:
Something our lives forgot to give us.
A man builds a house and says,
“I am native now.”
A woman speaks to a tree in place
of her son. And olives come.
A child’s poem says,
“I don’t like wars,
they end up with monuments.”
He’s painting a bird with wings
wide enough to cover two roofs at once.

Why are we so monumentally slow?
Soldiers stalk a pharmacy:
big guns, little pills.
If you tilt your head just slightly
it’s ridiculous.

There’s a place in my brain
where hate won’t grow.
I touch its riddle: wind, and seeds.
Something pokes us as we sleep.

It’s late but everything comes next.

Stan and I are taking a mindfulness class at St. Mary’s Health and Fitness. We both have meditated for years, but with our current health conditions, it couldn’t hurt to tune up our skills. The first week we had to keep a meditation journal, which for me was a good reminder to do at least a little every day. The second week our assignment was no radio or other music while driving and no television. No television is not too hard for us because we don’t watch much and we DVR shows we do want to watch. We also received colorful Zen dots which are removable round stickers to put all over your house and car and they remind you to take a deep breath whenever you see one. I have one on our Surface keypad,

one on my water bottle, 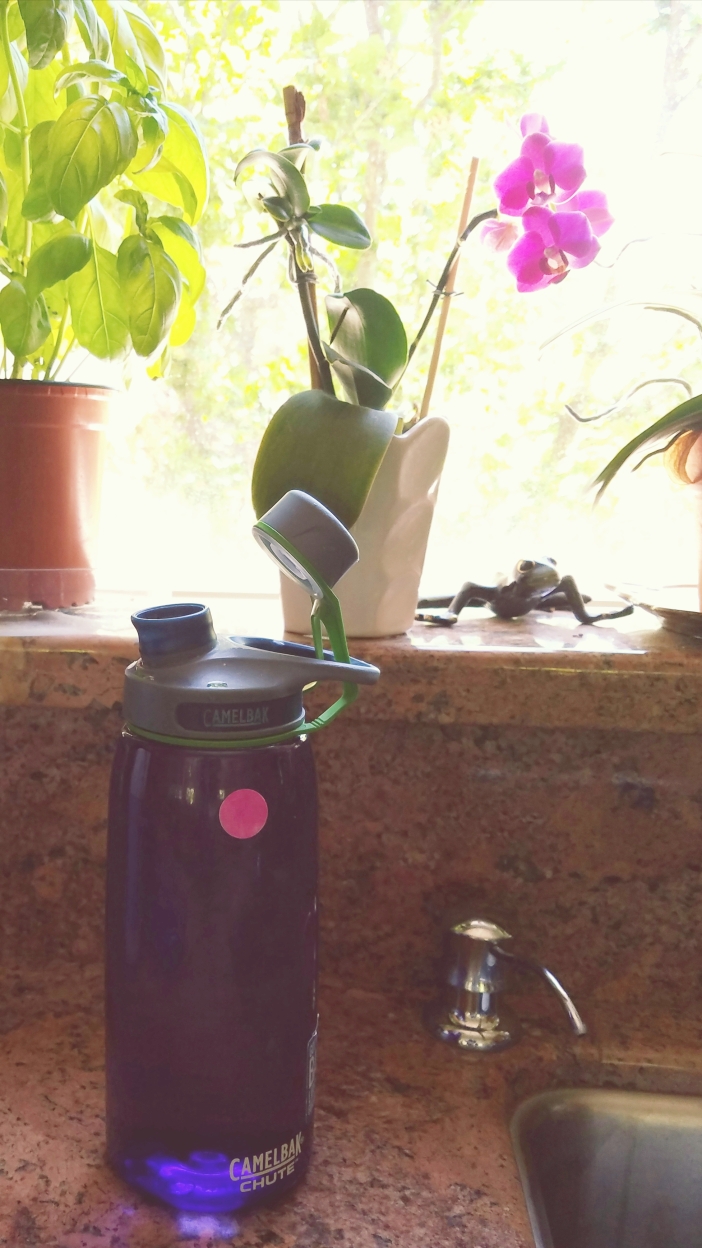 one on my Boogie Board,

and I put one Zen dot on my car radio dial.

I have always been a person who notices things, so that didn’t change much driving without radio. But I did pay more attention to my speed. And I was more mindful. We missed the third class, unfortunately, because the Radicava webinar was at the exact same time. The third class was on meditation to handle pain which Stan really needs. There was no class this week and next Wednesday will be the last one. Hopefully Stan can get caught up on the pain lesson.

I have been working on maintaining my inner peace at home despite the loud expressions of frustration and anger that at times spring from the guys I love. I went on strike as Andy’s manager, in that I won’t remind him to get his school work, chores, training, practicing, etc. done. I am done with the conflict: “I know Mom!” spoken quite loudly and then still not getting anything done. At first he begged me to not go on strike. He said, “I like you telling me what to do.” I said, “I am not going to college with you.” Stan has really stepped up his involvement in managing Andy which is awesome.

It measures breaths per minute and can tell if you are calm, tense, concentrating, active, or sedentary. I set mine to vibrate and notify my phone only when I am tense, because I am usually a calm person. it is interesting to see what causes me to be tense. Spire also has guided breathing meditations including one called clinical strength for pain and that has helped Stan a few times already. It is also water proof so I can use it during water aerobics.

I wake up early in the morning because I love the peaceful time before anyone else is up. My alarm goes off at 4:45 AM and our local public radio station comes on with 15 minutes of classical music which is usually wonderfully calming music to wake up to. At 5 AM NPR news comes on. I like to know what is going on in the world, but I do get more tense when I listen to it. I also get more tense when I look at Facebook, probably more so since he who shall not be named became the head of our country.

I now read an emailed news digest called The Skimm.  It’s witty, as well as succinct but detailed if you wish to click links. I find it to be less stress inducing than the news on the radio.  It was through The Skimm that I found out about Spire. You can check out The Skimm here:  https://www.theskimm.com/?r=b25ee41b   I do still read our local newspaper when I have time.

The news is full of terrorism and war, political strife, senseless killings. These things are not happening more in modern times than they did in history. They have always happened. Terrorism is part of war and wars have been fought throughout history over religious differences, political differences and power struggles. John Lennon said, “Imagine all the people living life in peace…imagine all the people sharing all the world” in his famous song Imagine. I will come across as a realist, and even maybe a naysayer because I don’t think this will ever happen. I think our planet will become even more full of war as resources shrink and populations increase.

As Naomi Shibab Nye said in her poem Jerusalem, “There’s a place in my brain where hate won’t grow”. It is through mindfulness and meditation that we can get in touch with that peaceful place within ourselves. And it will be more and more important to be able to go to that peaceful place as life’s hardships bombard our local, national, and international newsfeeds, as well as all of our lives.

4 thoughts on “Cultivating Peace Within”